Sins of the Father: The erasure of Females’ capacity for Epigenetics and freedom from violence.

“Biologists first observed this ‘transgenerational epigenetic inheritance’ in plants. [Hence my book and research about bioculinary and biosemiotics]Tomatoes, for example, pass along chemical markings that control an important ripening gene (2). But, over the past few years, evidence has been accumulating that the phenomenon occurs in rodents and humans as well. The subject remains controversial, in part because it harks back to the discredited theories of Jean-Baptiste Lamarck, a nineteenth-century French biologist who proposed that organisms pass down acquired traits to future generations. To many modern biologists, that’s “scary-sounding”, says Oliver Rando, a molecular biologist at the University of Massachusetts Medical School in Worcester, whose work suggests that such inheritance does indeed happen in animals (3). If it is true, he says, “Why hasn’t this been obvious to all the brilliant researchers in the past hundred years of genetics?”.
One reason why many remain skeptical is that the mechanism by which such inheritance might work is mysterious. Explaining it will require a deep dive into reproductive biology [especially the female biology and how the father’s DNA is the carrier of many diseases- not the mothers’] to demonstrate how the relevant signals might be formed in the germ line, the cells that develop into sperm and eggs and carry on, at a minimum, a person’s genetic legacy.’

Essentially we are reaping what our fathers- the patriarchs have sown. And its not good. My Kolo Informed Trauma work across the globe has provided the substantive evidence of intergenerational, transgenerational trauma incited by violence. Let me condense it down to a twitter feed; sins of the fathers.

I have written and posted many times about women as creators of culture due to their reproductive biological processes. I have written of the mitochondria, where the genetic information is passed unbroken from mother and daughter for thousands and thousands of generations. I have lamented in my research the same cry that is stated in the study, “Why hasn’t this been obvious to all the brilliant researchers in the past hundred years of genetics?”.
Dr. Lynn Margulis’s work on symbiosis evolved the genetic research but she talked about the all male sciences and their trained incapacities- the sins of the fathers.
I am often asked why is the unbroken mitochondria so important to understand? I ask why isn’t it obvious in the sciences to the rule of law? There are many epigenetic and humanitarian reasons for female biology, her DNA and mitochondria.
First off, the most needed reason is to survive. However, her female biology filled with sweet neuropeptides (hormones) – look at the bonding hormone-it is about evolving a genetic legacy of humanitarian values. Its’ the capacity to have the survival memories throughout the generations paired with epigenetically shaped memories for physical safety and freedom from violence. And its’ physical safety and freedom from violence for all her children and all of life.

You have to ask yourself what happened; sins of the father.
The sins of the father according to this study states its’ the germ line of sperm and the epigenetic inheritance from the fathers. The sins of the fathers is the epigenetic violence eradicating women’s capacity to evolve humanitarian culture and to heal trauma.
I have been to many libraries of research and museums where there was not a single book on the evolution of female biology mentioned in studies. The ostracizing of the great works of Dr. Marija Gimbutas, Monica Sjoo/Barbara Mor, Winifred Milius Lubell’s Baubo – anthropological evolutionary- epigenetic resources – by the various sciences, religious and philosophical fields is another example of the sins of the fathers.
It was Monica Sjoo/Barbara Mor who wrote, “ Woman is not comprehended as an evolutionary creatures. She is treated rather as an auxiliary to a male dominated evolutionary process… He evolves and she follows: he revolutionizes, she adjusts” [p.7].
Additionally, Monica Sjoo/Barbara Mor understood the female epigenetic process continues to be the target by patriarchy so as to do the “evolution/revolution of the female body into a capacity for non-reproductive sex” [p.11].

Statue of Baubo Goddess that became known as the Goddess of Lewd Jokes. c.a. 400 BCE

This is the opposite of female biological and culture healing capacities for a constantly evolving humanitarian environment. I have witnessed in Bosnia and across the globe how their refugee status, victims of conflict-wars was all about servicing the internationals instead of implementing the women’s humanitarian projects to improve the lives of their families and communities. Note how women’s creation of an evolving humanitarian environment as the culture healers are now about adjusting to the catastrophic impacts of violence against her.
Sins of the father are easily evidenced and at the same time avoided and denying of female realities borne from living in a world of violence for over 5,000 years. Look at the statistics worldwide on refugees about 60 million is estimated and its mostly women and children. Look at the global conflicts in almost every region of the planet. We are certainly a military industrial complex. (MIC). And everything is for the mega corporations and the elite who are 1% of the population but have 99% of the world’s wealth.

We need to face the fact – they are all male – authorities and in power over, the patriarchs and fathers of epigenetic inheritance of violence against women and children. This does inform all an intervention where forging alliances of war-affected women and children, violence against survivors within their countries and with networks in the wider world can be forces for the reduction of war and eradicating violence.
We do it by tackling deeply rooted inequities in power relations that cause and ignite such conflicts.
We do it by having women share and lead humanitarian action. Women have been healing trauma and sensitively cared for many in a social collective which can itself be empowering. 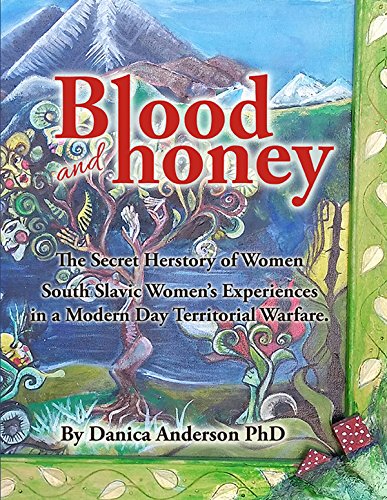 The first-person stories captured in Blood & Honey: : The Secret Herstory- Balkan Women War Crimes and War Survivors are raw, disembodied whisperings of the female holocaust, filled with symbols and icons that define trauma. A woman’s trauma is the wounding that cannot be forgotten, indelibly written upon her DNA and that of her children. The field of psychology recognizes herstory as a mode of representing and sharing intergenerational trauma and its psychological consequences, such as Post Traumatic Stress. Blood and Honey contains pages of storied instructions from the Bosnian women with whom I have worked since 1999. While the stories do not follow the typical masculine epic plot, the written pages are the women’s individual secrets, their herstories. They provide intimacy and a sudden knowing as opposed to understanding, an epiphany rather than a simple recognition of fact. What will be pages of tears at moments will become joy, and sometimes laughter, as we foray into herstories.

Receive via email periodic newsletters, articles and be the first to know about upcoming events and opportunities to get involved.

Receive via email periodic newsletters, articles and be the first to know about upcoming events and opportunities to get involved.